Herrmann Services is a family-owned and operated company serving all Greater Cincinnati and Northern Kentucky communities for over 50 years. In 1968, Richard J. Herrmann began to build a legacy for his family by opening the doors to Herrmann Plumbing. In the beginning, the company was a small, one-man plumbing shop. Richard soon found out that remarkable service and craftsmanship are impossible to keep secret. Richard’s inner circle started telling their friends and families about the care and skill he delivered. He was delighted to expand his company by bringing on other elite craftsmen to meet the rising demand for his growing business. He chose his employees very carefully, making sure they genuinely cared about helping every one of their customers and knew their craft inside and out.

Soon after Richard opened the doors to Herrmann Plumbing, his wife, Yvonne, and their children became a crucial part of the business. Richard would say “if you are strong enough to pick up a shovel, then it is time for you to work.” This was the norm around the Herrmann household and as their children got older, they each became more and more involved in the business. It was during those first few years that Herrmann Plumbing truly became a family business.

Their oldest son, Kim, was the first one to join the company, earning his State of Ohio Master Plumbing and Backflow Licenses and, following Richard’s retirement, served as President of the company. He has since retired but still works a couple of days a week to make sure that operations are going smoothly. Kevin continues to provide superior service as a licensed plumber and is now the President of the company. Kris, the youngest of the bunch, took control of the finance department in 2002. She is known for “keeping her brothers in line”. 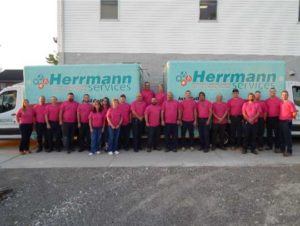 A few third-generation Herrmann’s are also involved in the business. Jason, Kim’s son, joined the ranks of the plumbers in the early 90′s and has since earned his Plumbing License, Backflow License, and State HVAC Licenses for Ohio and Kentucky. He currently holds the title of Service Manager. Tony, Kim’s youngest son, is a licensed plumber out in the field. He currently holds his Plumbing License, Backflow License, Medical Gas License, and has extensive experience in the commercial and industrial field. His skills will help in providing superior service to our customers. Bryan, son of Kris, joined the family business in 2012 and currently serves as our office manager. His degree from Miami University and valuable customer service experience have made him a great fit within the company.

While not all of the staff members are from the Herrmann family, we strive to hire the best in the business to welcome into our family. Prior to being hired, each potential team member goes through a rigorous screening process, ensuring their success as a member of the Herrmann Services team.
See our online listings & company profiles here.

In 1999, Herrmann Plumbing expanded its services to include heating and cooling and the company name was changed to Herrmann Plumbing, Heating & Air Conditioning. In early 2008, 40 years after the start of the business, Herrmann expanded its services one more time to include electrical services and changed its name to Herrmann Services. This change reflects not only the development of new services but also emphasizes the company’s continued focus on customer service.

In recent years, the company has grown into one of the largest and most respected names in the region. We have remained steadfast to Richard’s two founding principles: Remarkable Service & Remarkable Craftsmanship. We continue to create higher standards for ourselves and consistently strive to go above and beyond the expectations of our customers. The company’s success and longevity are a testament to the dedication and hard work of the entire Herrmann family.